FORBES: What To See And Snag At Toronto’s Foremost Art Fair

TORONTO STAR: SIZE DOES MATTER WHEN IT COMES TO ART

Toronto Life: How an artist built a lake inside a Toronto art gallery

NOW Magazine: STEVE DRISCOLL POURS IT ON AT ANGELL GALLERY

Related link: Smoke Show and Other Deceptions in Paint

Five exhibitions to check out over the holidays 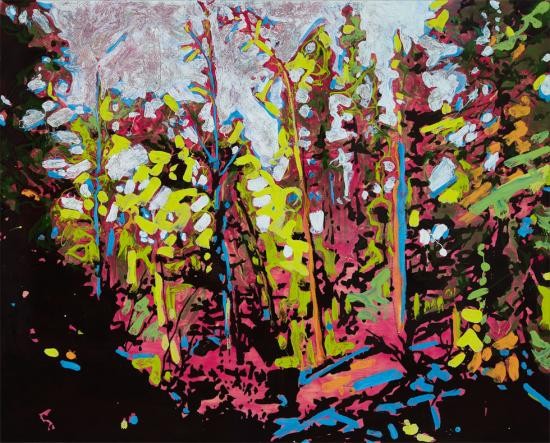 Inspired by a 26-state road trip around the US, Canadian-born painter Steve Driscoll re-envisions the landscapes of his native Ontario. The large-scale contemporary paintings employ a vivid palette while the expressionistic style is achieved through the artist’s innovative use of urethane-based paint poured from above to add texture and life to the paintings. Many of these works capture an animated sense of the wild yet bring a chemical modernity to the scene. Opened in spring 1996, the Angell Gallery supports an international roster of emerging artists. 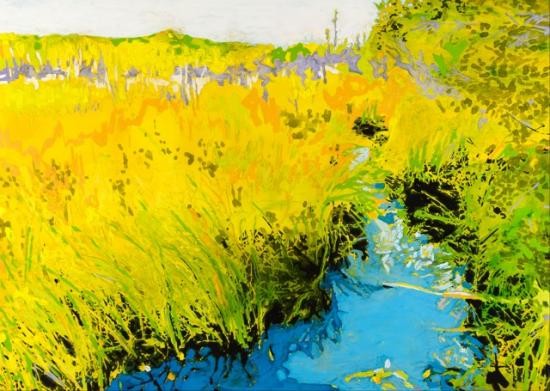 Sholem Krishtalka, The Globe and Mail

Competent, vivacious landscapes, with a whiff of indulgent atavism. Sans urethane, dangerously close to a Group of Seven pastiche. 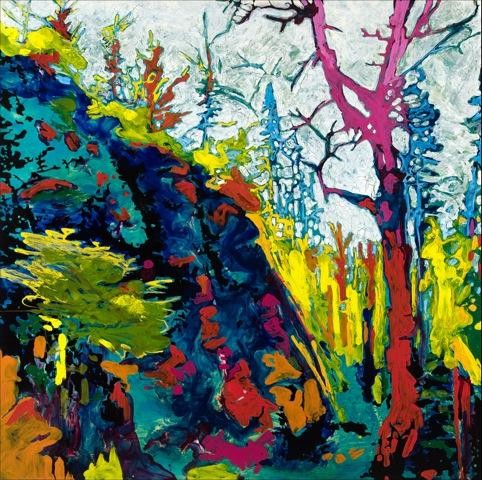 Toronto-based contemporary artist Steve Driscoll has been free-pouring urethane for a decade, allowing the industrial material to mingle with paint for creations that flow and pool. Driscoll’s approach converts the standard Canadian landscape into a whole new expressionistic look.

Driscoll’s dashing paintings, with their psychedelic palette and unconventional technique (poured urethane on board) are firmly planted in contemporary ground, yet have deep roots in the venerable North American landscape painting tradition. -Angell Gallery exhibition notes

On exhibit through mid-January at Toronto’s Angell Gallery, Driscoll’s new body of work, North Swallow, refers to the series’ origins in an extended road trip that took him through 26 states. “I was collecting places, images and landscapes,” says Driscoll. “Each new place carried with it new colours, textures and space.”

Angell Gallery, Toronto, where his show, North Swallow, is on exhibit through Jan. 12, 2013. 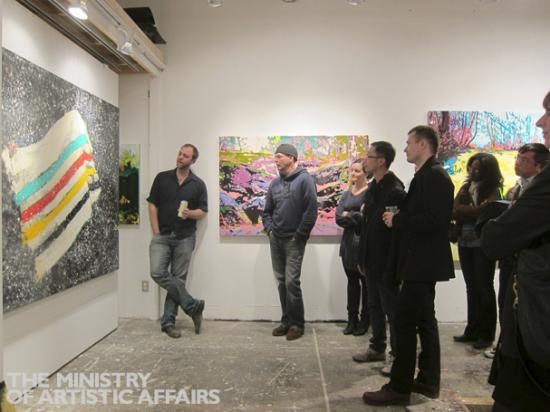 The Ministry of Artistic Affairs

On Thursday, March 15 members of the Ministry were invited into the studio of Toronto-based painter Steve Driscoll for a private tour of his working space and an opportunity to hear him talk about his work, inspirations and artistic process. Driscoll is represented by Angell Gallery in Toronto. 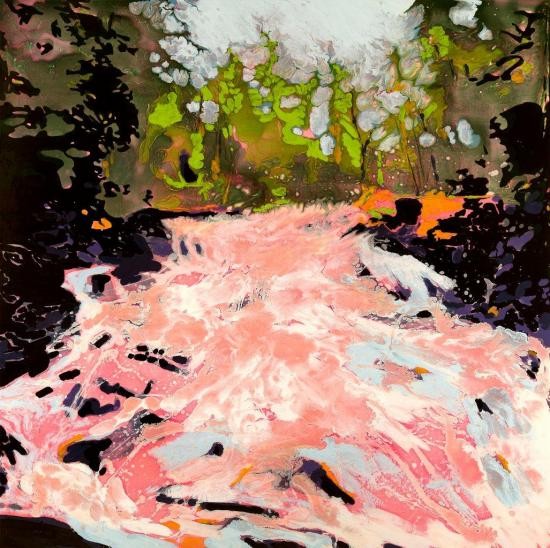 At Angell Gallery until January 14th is Steve Driscoll's "Heaven is Where You Find it," a solo exhibit of work that bathes in the tradition of Canadian landscape painting. As dull as it can be, this well loved practice can thankfully, from time to time, get shoved around a little bit, and forced to be less lame. Driscoll does it by handing you an acid trip in Northern Ontario, whether you're ready for it or not. A psychadelic palette and ballsy use of urethane to show us the landscapes we know so well landed these unassuming paintings a home at a contemporary hot spot like Angell. I say unassuming because Driscoll is taking on a tradition that is about as generic as painting gets in this country, and in print the images don't do a thing. But, mark my words, once you take that first look in person, you'll find it pretty hard to come down.

I get pissed off when I'm looking at a painting through highly reflective glass. Firstly, because all I can see is glare, and secondly because it almost always happens at an institution that could afford to save me from that kind of frustration. The act of looking at Steve Driscoll's painting is dangerously close to being that vexing. And although the plastic glow of urethane can be so kitschy, the medium is vital to his work, and actually used in a way that makes it not only tolerable, but intriguing.

In the same way I wouldn't eat shitty pasta, I definitely wouldn't care for these paintings had they been done in oil. The industrial character of urethane changes the landscapes. Driscoll is giving a brain to another pretty face. He manages to transform some token Canadiana into something toxic, giving his pieces a depth and sense of self-awareness that they wouldn't otherwise have. It's a marriage of weathered with pristine, nature with industry. Sure urethane is gross. It stinks when it's wet and it's lurid when dry. But, like anything that is tasteless and showy, it can suddenly turn awesome when paired with the right thing.

"Gordon River Dam" is probably the most lucid, most abstracted piece in the show. It has that inviting, unfinished quality of a decomposing renaissance underpainting. While some pieces have this unfinished, rough sketchiness to them, others appear filled in and certain, but within and connecting all of the work is a strong sense of fleeting moments. The way the urethane is layered gives the impression that it could drip from the support at any minute. Like if I went back to see it tomorrow it would be completely different, sagging, droopy, forever changed and still changing. Like an oil spill, the colours float on top of each other, not touching, and certainly not permanent. This, to me, is where the work is strongest; when, through a gaudy medium that it practically oozes fakeness, the chaos and entropic nature of the subject is revealed. Nothing is forever. Viva change!

Related link: Steve Driscoll – Heaven is Where You Find it

Catching the Waves: Steve Driscoll inspired by 'the vast and powerful pulse of the ocean' 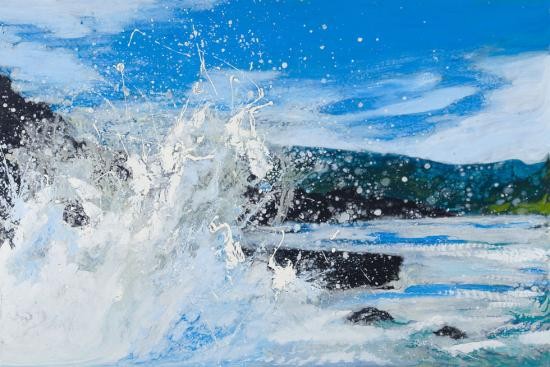 Growing up in Ontario, Steve Driscoll was perhaps not privy to the deceptive calmness of the ocean. Quiet one minute, roaring upon the rocks the next, the unpredictability of the water at its edge was a source of inspiration Driscoll wasn’t to experience until 2004, during his first visit to Pouch Cove.

The visual artist spent close to a month immersed in the local landscape, marveling in the power of the sea, often exploring by day; painting through the night.

“Upon my arrival in Pouch Cove, I was immediately drawn to the ocean and was fascinated by the steady yet unpredictable crashing of the waves,” Driscoll said.

At that point in his career, said Driscoll, now 30, he was already well into his work with his painting medium of choice — urethane — but was still experimenting with what it could do.

As it turns out, it was the perfect vehicle for him to capture the dance of the waves and their explosiveness as they collided with rocks.

“Urethane is fluid by nature, and the finished paintings retain this quality,” he explained.

While Driscoll was able to capture the water’s movement back then, he wasn’t quite able to express the explosion of water the way he wanted. Now, seven years on, he tried again, armed with photos taken during his first visit.

“Although I used photos to place the paintings, the crashing of the waves are mostly imagined or constructed through memory,” he said. “I set myself the task of capturing the vast and powerful pulse of the ocean, and the explosive rise of the water as the waves break.”

The result is “Dance of the Dories,” a 14-piece collection of urethane-on-panel artwork that will be shown at the James Baird Gallery in Pouch Cove from this Saturday until June 25.

Baird took a liking to Driscoll and his work when he first saw it in the studio space Driscoll shared with other painters in Toronto. At the time, Driscoll was represented by the same gallery as some of the more senior artists who had been to Baird’s Pouch Cove foundation, and Driscoll wanted to come to Newfoundland.

“Three years ago, Steve’s work took a more representative direction, and we joined forces to produce a 200-page monograph of his work, and organize exhibitions nationally and internationally,” Baird said.

Baird continues to be drawn to Driscoll’s work, calling him “the best thing since sliced bread” on his website.

“I’m a colourist; all the painters I represent and exhibit love to use vibrant colour in their work,” Baird said. “Steve is no exception, but more than that, he has developed a unique art practice in a medium that no one else uses: urethane. That material has properties unmatched by oils or acrylics, which is manifested in a physicality I adore.”

The use of urethane as a painting medium is very rare because its application is very toxic, Baird explained.

“Steve had learned over the past years to handle the material effectively, but during the learning curve, he has been able to explore the medium, working through many themes to find what is most successful for him and his art.”
Most of the current pieces show the explosive dance of water that enchanted Driscoll on his first visit here: there are waves upon waves, crashing into rocks and colliding next to boats, under calm skies and stormy skies, day and night. “Rolling Force” and “Blinding Spray” seem to be angrier pieces in colours unlike most of the others — blacks, purples, greens — while in “Eye of the Wave,” Driscoll’s urethane seems to gurgle beneath the foam of a crashing wave.

In “Morning Break,” drops and splashes of urethane depict perfectly the spray of the ocean in the air.

The only exceptions to the water dance are two paintings of buildings that drew Driscoll’s interest during his last visit here, last fall: Five Island Art Gallery in Tors Cove and an old shack he found on the drive between Pouch Cove and St. John’s.

“The windows of these buildings and the images captured in their reflections caught my eye,” Driscoll said. “Although the reflections are generally distorted, there is something inviting about them. As a viewer looking at the painting, you want to know what is inside the building, and what could be seen from inside, looking out.

“Specific location aside, I felt the wave-crashing images needed to be bracketed by a place where the viewer could be, so in this case, you might find yourself caught in a reflection, watching the waves.”

Baird says the images of Driscoll’s “Dance of the Dories” pieces don’t reproduce as well as his previous work, leading to a pleasant surprise when they actually arrived at the gallery.

“I was delighted to open the crates and be overwhelmed by the presence of the new paintings,” he said. “The view out my window in Pouch Cove is filled with ocean, but these works take the crashing waves and rough coastline in a new and wonderful direction.”

The public exhibition opening for Driscoll’s “Dance of the Dories” will take place at the James Baird Gallery, 654 Main Road in Pouch Cove, Saturday from 3-6 p.m.